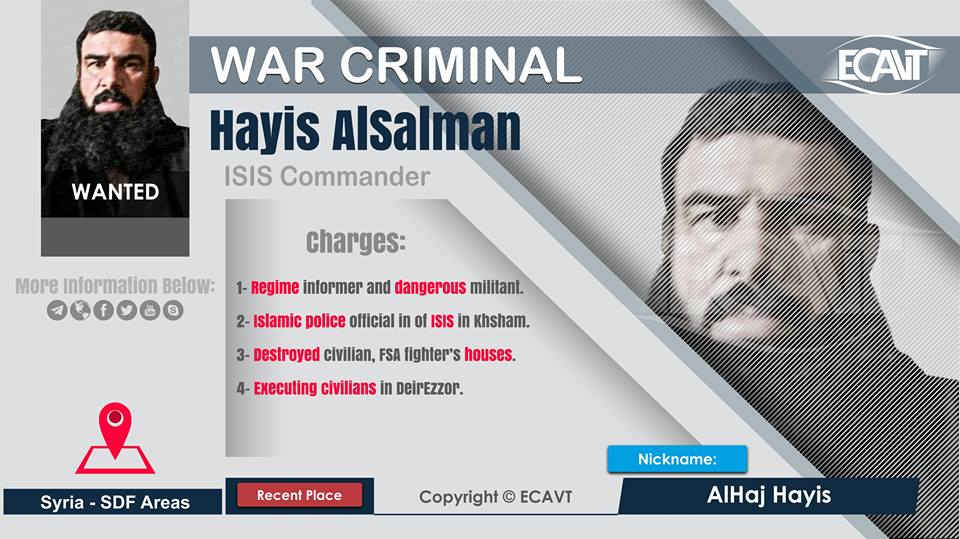 Name: Hayes ALSalman
Age: 55 years
Title: Hage Hayes
Position: A dangerous leader in ISIS terrorist organization
Salman descends from the village of Khasham in the eastern countryside of Deir Ezzor from the Al-Akeidat clan (Annabeza) Known locally as (Haj Hays) He was one of the first supporters to ISIS and declared total his allegiance to them and was headed what is known as the Islamic Police Bureau “in the village of Zaghir west of Deir Ezzor before being transferred to the town of Khasham and take over the leadership of the” Islamic police ”
After investigation and follow-up, it turned out that he was one of the members of the Free Syrian Army, which is directly connected with the Syrian regime forces. According to the certificates obtained by the center,ALSalman smuggled seventeen elements of the regime forces from the Conicu oil field in Khasham town.
To the military security in Deir Ezzor for large sums of money after the matter was revealed.He coordinated with Amer al-Riffadan, the most senior ISIS member, and the first official responsible for the entry of the ISIS organization to the Deir Ezzor governorate, which was then equipped to enter ISIS.
He then received the task of managing the so-called ISIS Islamic Police, which confirms the close relationship between ISIS and the Syrian regime. Among the testimonies we have obtained is the demolition of several houses belonging to civilians and former fighters of the moderate opposition,Among the crimes committed by the Salman is the killing of a young man named Muhannad al-Jebn. We received a testimony from one of his brothers: He is al-Salman, who killed my brother on 13/03/2013, escaped and then returned to the region as ISIS leader, accompanied by Amer al-Rafdan.According to the information obtained, the suspect (Haj Hayes) holds a leading position in the intelligence office of the Syrian Democratic Forces (SDF) in the western countryside of Deir Ezzor and has wide powers to arrest anyone and fabricate the charges against him We note that the attached picture was very difficult to obtain it
Euphrates Center Against Violence and Terrorism calls for prosecution of war criminals. The Center also maintains special documents and take care from mentioning witnesses for their own safety.. In order to preserve the rights of the victims, we invite you to participate and contribute to this by providing any information concerning war criminals by contacting us on: ecavt.org@gmail.com