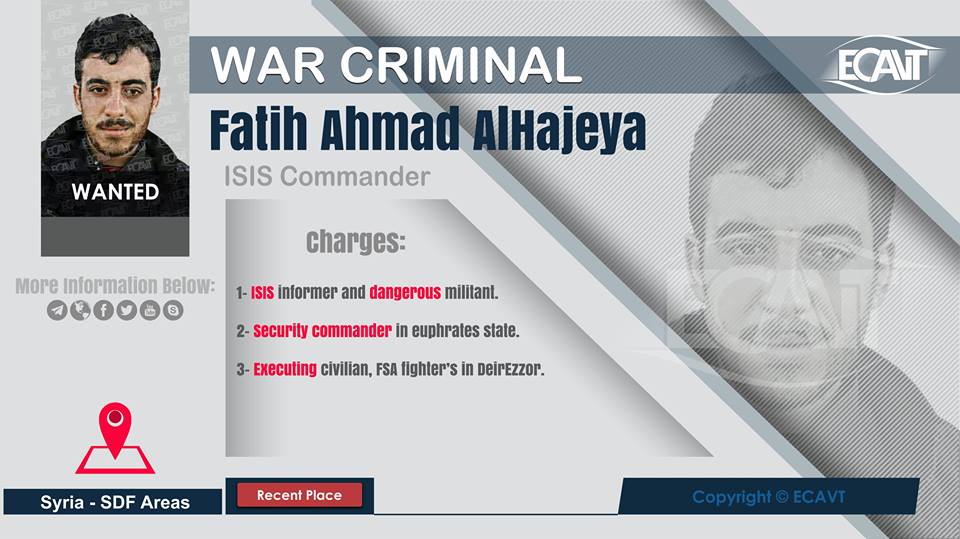 Name: Fatih Ahmed Al Hajieh
The city of Albukmal is born
Age 28 years old
His position: Amir of security in the so-called health department in the Euphrates state
As part of the prosecution of those accused of committing war crimes and belonging to terrorist organizations, we were able to obtain information condemning Fatih, who is considered one of the leaders of the terrorist organization. He was one of the
members of the Brigades ALLAH AKBAR Led by Khazal al-Sarhan
Fled to the oil field of Kam, which was controlled by the organization
And he Loyalty to the organization with a man named Abu Kalbajah and his father Ahmed and his brother Shihab and became the right hand of the terrorist Saddam Jamal,One of the crimes committed by Fatih alhajeh is his involvement in the storming of the town of Al Bukamal and the killing and wounding of a number of civilians
With the siege of the organization in Albukmal, he fled to the village of Sousse accompanied by Saddam al-Jamal and then fled to the areas of the Syrian Democratic Forces (SDF), including to the north of Syria. He was arrested on 14-11-2017 A day at the Aoun al-Daddat checkpoint in the countryside of eastern Aleppo and then was released at the beginning of the new year. According to some of the accounts we reached, and we were not sure that it was true, it was reported that the security apparatus in the city of Graples was the one who released him
Euphrates Center Against Violence and Terrorism calls for prosecution of war criminals. The Center also maintains special documents and take care from mentioning witnesses for their own safety.. In order to preserve the rights of the victims, we invite you to participate and contribute to this by providing any information concerning war criminals by contacting us on: ecavt.org@gmail.com