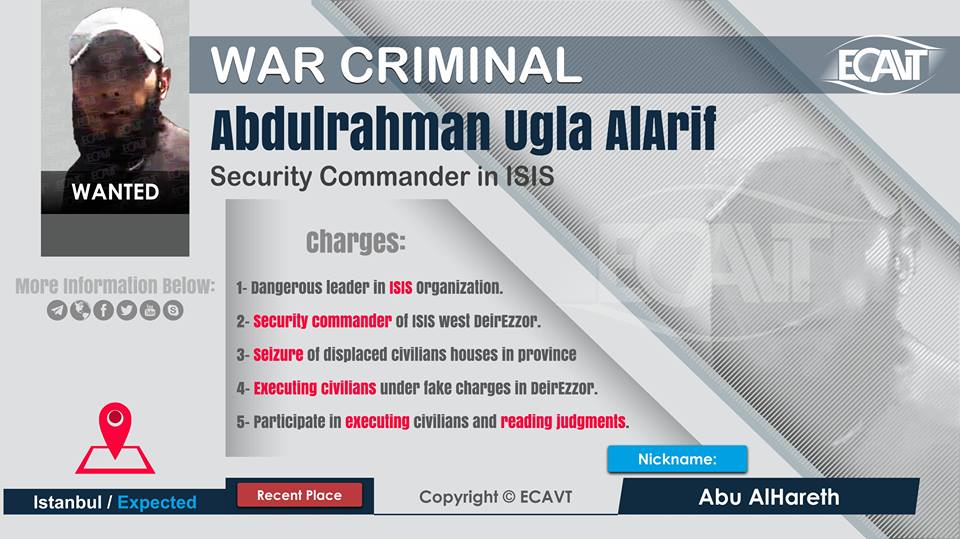 Name: Abdulrahman Oklah AlAref.
Born in Syria – Diralzour, Sfera village in the western countryside of the province, Alarif joined the faction of “Affatihun Men Ard AlSham” which belongs to “Nasra Front” in early 2014, and joined the ISIS terrorist organization during their first entry to the province, in the middle of the same year “secretly” then appeared with the organization as a prominent leader Close to the leaders of the first row in the organization such as “Amer Rafdan and Abu Montaser”.
During the period of his presence with the organization, he held several positions: Prince of the western countryside in DeirEzzor, the prince of real estate, the prince of agriculture in Raqqa.
The evidence collected by the Euphrates Center proved that he committed war crimes of the first degree, such as execution of civilians and continuous participation in field executions, violence against the residents, financial extortion, confiscation of the property of the displaced civilians, and all these charges are documented by witnesses we’ve met in Euphrates Center.
Abdul Rahman alAref fled to the western countryside of DeirEzzor after Syrian Democratic forces SDF took control of the city of Raqqa and from there towards Turkish territories. We received information indicating his presence in Istanbul with his brother, “Abdul Qadir AlAref AlOmar”, Whom also known as Abu Hammam and one of ISIS security commanders.
Euphrates Center Against Violence and Terrorism calls for prosecution of war criminals. The Center also maintains special documents and take care from mentioning witnesses for their own safety.. In order to preserve the rights of the victims, we invite you to participate and contribute to this by providing any information concerning war criminals by contacting us on: ecavt.org@gmail.com
We’ll publish after a while a video shows Abdulrahman AlArif during commiting field execution in DeirEzzor.