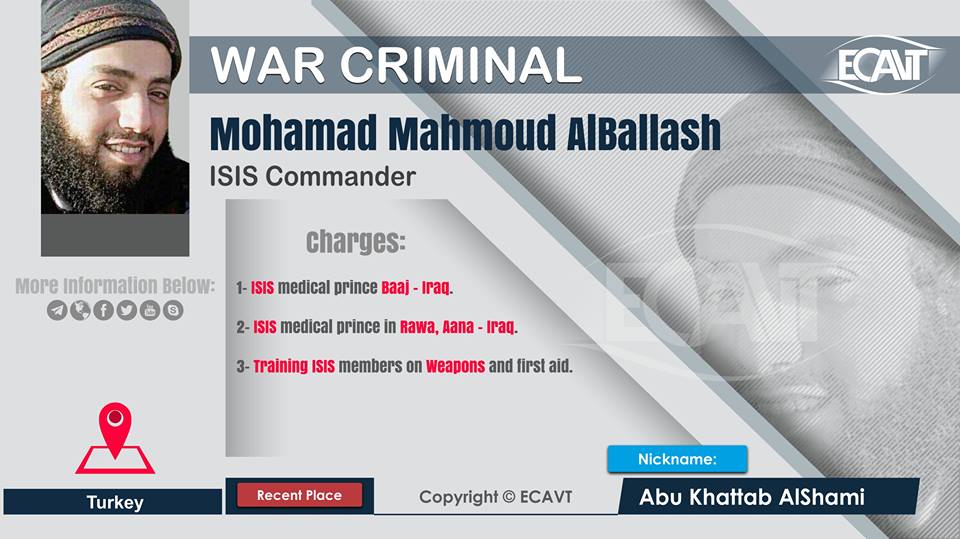 Name: Mohamed Mahmoud Al – Balash
Title in the ISIS: Abu Khattab ALShami
Al-Qouriya City-Al-Buawad District
Born in 1988
As part of the prosecution of those accused of committing war crimes, we were able to obtain information about Mohammed al-Balash Studied at the Faculty of Pharmacy in Damascus and with the emergence of a strong lobbying organization in Iraq joined the organization of the preacher in 2013 in the city of Anbar and Abu Khattab held military and legitimacy courses And trained a number of elements of the organization on first aid and participated Abu Khattab in the battle to control the city of Albukmal within the ranks of the ISIS army coming from Iraq,He then received the post of the so-called Amir Medical in the state of Baaj in Iraq After that, he was handed the post of health prince of both the cities of Rawa and Aana in Iraq As the battles of the last Dire Ezzor countryside began, he went to the Tiyana area and then fled to the control areas of the Syrian Democratic Forces (SDF)then to Turkey after the payment of money to the barrier of ALAWON controlled by the Northern Brigade and we have obtained oral certificates confirm this.
Euphrates Center Against Violence and Terrorism calls for prosecution of war criminals. The Center also maintains special documents and take care from mentioning witnesses for their own safety.. In order to preserve the rights of the victims, we invite you to participate and contribute to this by providing any information concerning war criminals by contacting us on: ecavt.org@gmail.com