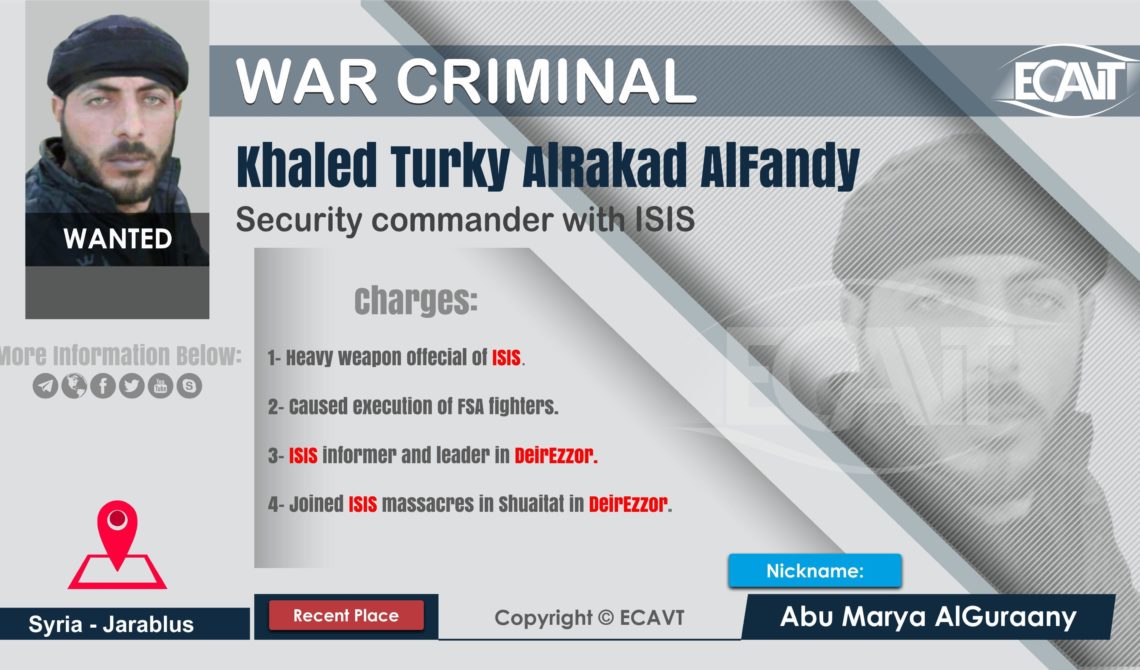 Name: Khaled Turki Al-Rkad Al Fendi
The city of AL-Qorya
Title: Abu Mariah Al-Qurani
In the context of the prosecution of war crimes, we were able to obtain information about Abu Mariya al-Qarani, a local leader of ISIS,Was one of the elements of the Qaqaa Brigade of the Free Army before many of the elements of the brigade joined the organization ISIS, announced loyalty ISIS in 2013 accompanied by Saddam Al-Jamal and Al-Hudawi, two of the leaders known to the organization,He was in charge of the heavy weapons of the organization in the first period and according to the testimonies we obtained, the Fendi had
Participated in the storming of the city of Albukmal Using anti-aircraft guns, which was designed during the incursion and the execution of many elements of the armed opposition (the Free Army) in Deir Ezzor, especially the areas of Al-Qawriya and Albukamal , Participated in the battle of Shu’aitat and was assigned to transfer the ammunition to the military battle points during the storming of the towns of Shuayat in the eastern countryside of Deir Ezzor, then received a security position and was the right arm of the leader Mahmoud al-Matar, close to the terrorist Saddam al-Jamal, who was the governor of what is known as the Euphrates state.He was always frequented to naoras Alhadidi known as Abu Bilal, the security chief in the city of Albukamal and with the control of the Syrian Democratic Forces (SDF) on large parts of the region fled to the Syrian north The Al-Oun checkpoint, which is controlled by the Northern Brigade, arrested and imprisoned him in the town of ‘Azzaz. He paid a sum of money and left the prison. According to the information received, he currently resides in the city of Grapels.
Euphrates Center Against Violence and Terrorism calls for prosecution of war criminals. The Center also maintains special documents and take care from mentioning witnesses for their own safety.. In order to preserve the rights of the victims, we invite you to participate and contribute to this by providing any information concerning war criminals by contacting us on