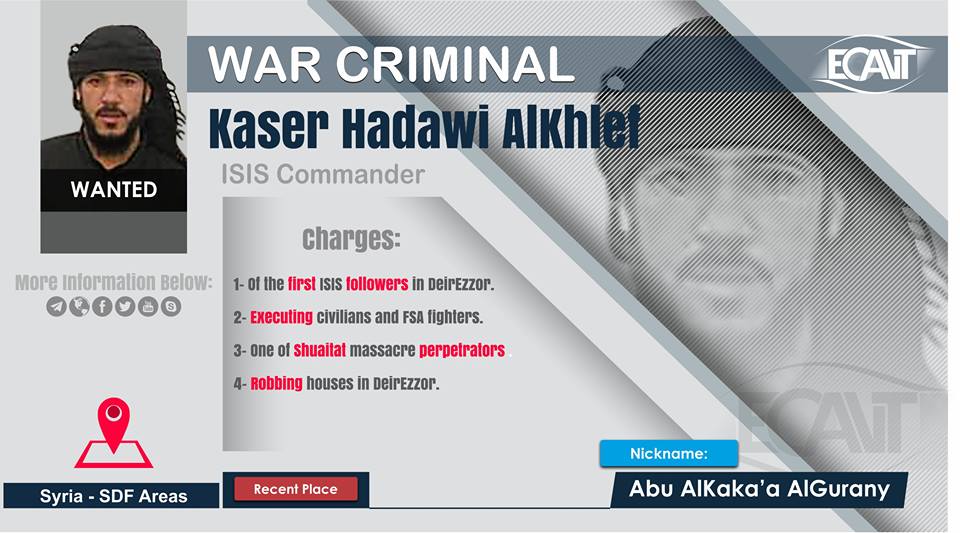 Name: KASSER AL-HADDAWI ALKHALIF
Title: Abu Qaqaa Al-Qorani
Nationality: Syrian-Deir Ezzor – Al-Qouriyah City
Age: 33 years old
One of the most prominent leaders of ISIS terrorist organization in the province of Deir Ezzor, accused of war crimes, was a member of the Free Syrian Army’s Qaqaa Brigade.Al-Haddawi started terrorist acts through marketing to the organization before entering Deir Ezzor. . According to the testimonies obtained by the center, al-Haddawi set up military barriers in the city of Qouriya and raised the flags of the terrorist organization and the siege on the moderate military factions and prevent them from fighting the organization in addition to supporting the organization in the AL-BADIA and providing them with supplies and ammunition,
Announced the Allegiance to ISIS for the first time in the state of Badia by the Prince of War ISIS Abu Omar Chechani in the oil field AL-KAM in the badia of Deir Ezzor, after the entry of the organization ISIS and his full control of the eastern countryside of city Deir Ezzor became with his group of senior leaders of the organization
This is due to the relationship of kinship that combines al-Haddawi with Saddam al-Jamal, the terrorist known. as Al-Haddawi sister one of Saddam’s wives
M.A says one of the moderate opposition fighters: Al-Haddawi arrested all the members of the Free Army whom he knew in the region and put them in prison and forced them to join the organization.
As for the famous Shuaitat massacre committed by the organization against members of the Shuitat clan, we received verbal testimonies
According to the participation of al-Haddawi in this massacre, son of clan al-Shaitat (alias) said:Kasser blasted the Shu’aytat area of by tanks from Mount of al-Dweir towards the town of Abu Hamam and led to the martyrdom of a number of civilians, including one of my cousins, following the son of Shuaitat. He said: We all know kasser because of his constant hesitation to our region when he was a member of the Free Army.
He participated in the storming of the towns of al-Shaitat with the organization and committed crimes against civilians and fighters from the children of Shuaiteh, in addition to the theft of a large number of the property of the people and I was able to identify other people who participated in the storming of them called Abu Ali Qaqaa and his real name (Khaled Al Hassoun) Who killed a number of people in the Shuaitat area during the storming in addition to stealing all cattle in cooperation with Khadr Al-Hadawi and sold to traders from the countryside of Aleppo,They used names that were not real, but everyone knew them. Among them was Mahmud al-Matar and his cousin, the heavy weapons official, Abu Ziaa al-Qurani, whose real name is Haji al-Rafie, the security man, Abu Layla, and his real name, Ahmed al-Matar.He concludes: The pictures of the people of my village killed by the organization are still stuck in my eyes Also pictures of who killed them.
After tracking down al-Haddawi, we were able to obtain special information about his escape to the areas of the Syrian Democratic Forces (SDF), accompanied by his brother Yasser, who is also accused of committing war crimes. The first was shot by unknown persons
Euphrates Center Against Violence and Terrorism calls for prosecution of war criminals. The Center also maintains special documents and take care from mentioning witnesses for their own safety.. In order to preserve the rights of the victims, we invite you to participate and contribute to this by providing any information concerning war criminals by contacting us.