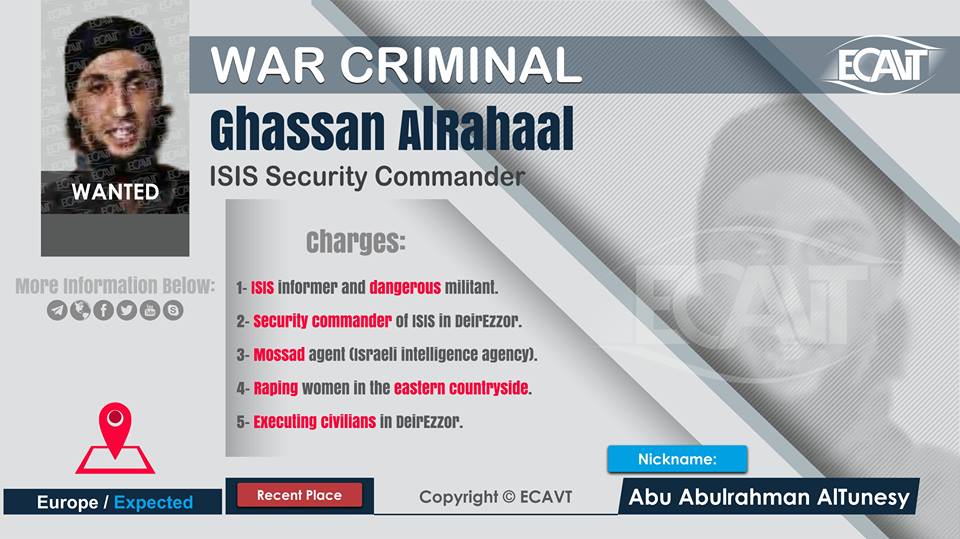 Name: Ghassan Rahal
Title: Abo Abdel Rahman El Tunisi
Nationality: Italian of Tunisian origin born 92
As part of the prosecution of those accused of war crimes, we were able to obtain information about the accused Abu Abd al-Rahman al-Tunisi Entered the province of Raqqa across the Turkish border in late 2013 and announced loyalty to the organization accompanied by a large number of foreign nationalities,Al-Rahal is considered one of the most dangerous figures in the organization because he infiltrated the armed opposition factions in Deir Ezzor and had a great intelligence role in facilitating the organization’s control over the city of Deir Ezzor and its countryside To take over the post of Emir of the security in what is known to the organization in the state of Al-Khair, Al-Rahal is accused of executing civilians and the monitoring team was able to obtain testimonies from their relatives, Rahal is also accused of rapes. We have obtained certificates that we could not confirm. More than one witness said that he married more than one Syrian woman from the eastern countryside against her will, in addition to marrying a Chechen woman.In mid-2017, the organization announced a financial reward for those who gave information about the backpacker. The organization accused him of working for the Mossad,It is expected that the backpacker has fled to Europe since then, we have been very difficult to get his personal image (you will find in the comments)
Euphrates Center Against Violence and Terrorism calls for prosecution of war criminals. The Center also maintains special documents and take care from mentioning witnesses for their own safety.. In order to preserve the rights of the victims, we invite you to participate and contribute to this by providing any information concerning war criminals by contacting us on: ecavt.org@gmail.com