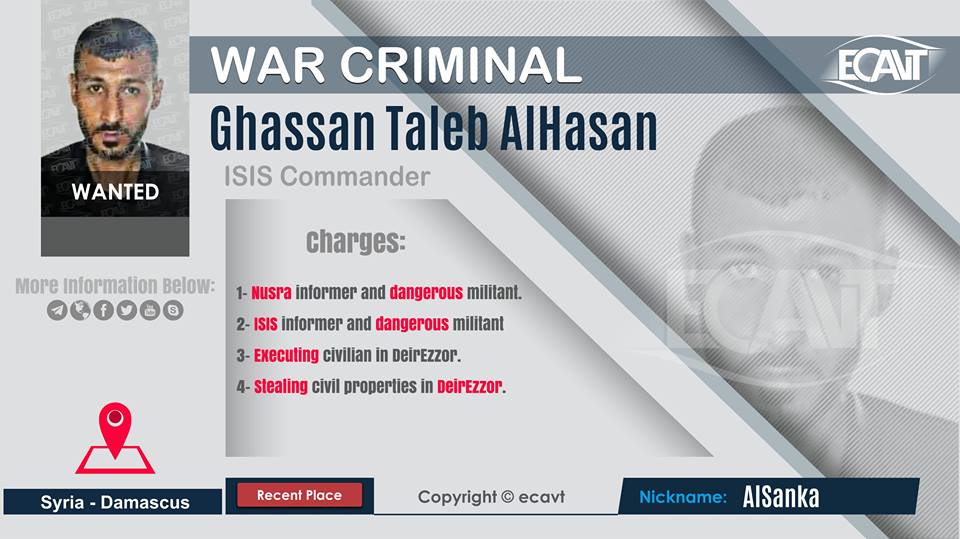 Name : GhasanTaleb Hamoud El Hassan
Surname: AL- Sanaka
Born: in Mayadin
In the context of tracking down and prosecuting those accused of war crimes, we were able to obtain special information indicating the presence of Talib al-Hassan in the Syrian capital Damascus after joining the forces of the regime
According to photographs and special testimonies received by the center, “Al-Sanaka” was a member of the jabhat alnusraa, which is classified as a terrorist organization. He played his full role in spreading terror and fear while erecting barriers in the city of Al-Mayadin and stealing money from iron and cement trucks
He later joined the ISIS terrorist organization and worked as a detective and caused the death of Omar Alltamo, kamel alhaywan, Fadi al-Saiou and Saleh al-Ali,
For nearly six months, he fled to Daraa and joined a military faction affiliated with the Army of Islam. He stole military equipment and a car in coordination with the regime forces and a son of Ghazi al-Harib. He is now in Damascus
Euphrates Center Against Violence and Terrorism calls for prosecution of war criminals. The Center also maintains special documents and take care from mentioning witnesses for their own safety.. In order to preserve the rights of the victims, we invite you to participate and contribute to this by providing any information concerning war criminals by contacting us on: ecavt.org@gmail.com