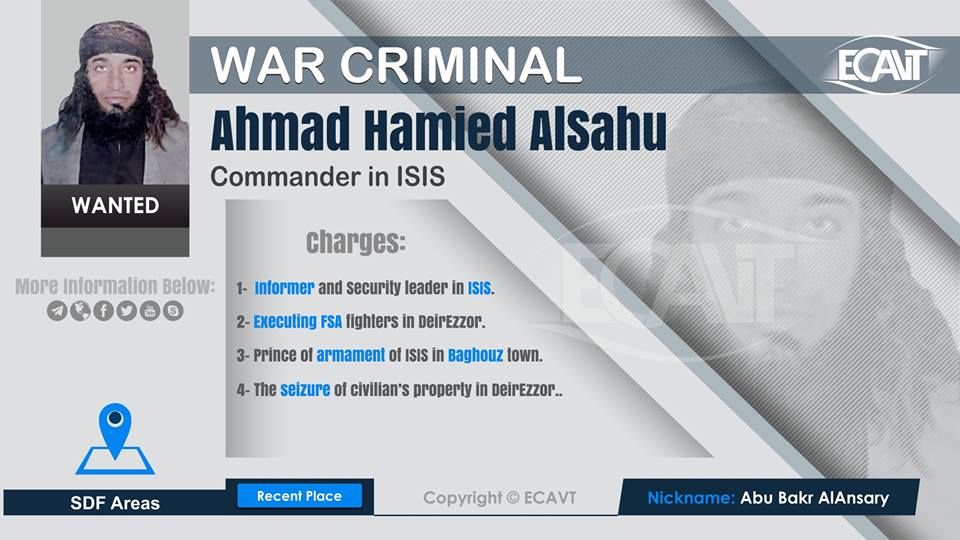 Name: Ahmed Hamied AlMahmoud AlSahu.
Place and date of birth: DeirEzzor, Tabiya Jazira, 1988.
AlSahu worked before ISIS came to DeirEzzor, as a weapon dealer, then joined the ranks of the organization in DeirEzzor mid-2014, and began with ISIS as a small informer, and then he became one of the security commanders in the region, and specifically in this period, he was accused of the killing a number of elements of the Free Syrian Army in the towns of Tabiya and Khasham.
He was nicknamed among the members of ISIS “Abu Bakr AlAnsari” and collected a big wealth during his work with the organization, until he took the position of “Prince of armament” in the current period in which the organization was trapped in the town of baghouz east of DeirEzzor.
After the withdrawl of ISIS organization towards Bagouz, and just three days ago, AlSahu paid for SDF fighters in exchange for allowing him to escape outside the besieged areas, and intends to go to the north of Syria in coordination with the them.
Euphrates Center Against Violence and Terrorism calls for prosecution of war criminals. The Center also maintains special documents and take care from mentioning witnesses for their own safety.. In order to preserve the rights of the victims, we invite you to participate and contribute to this by providing any information concerning war criminals by contacting us on: ecavt.org@gmail.com