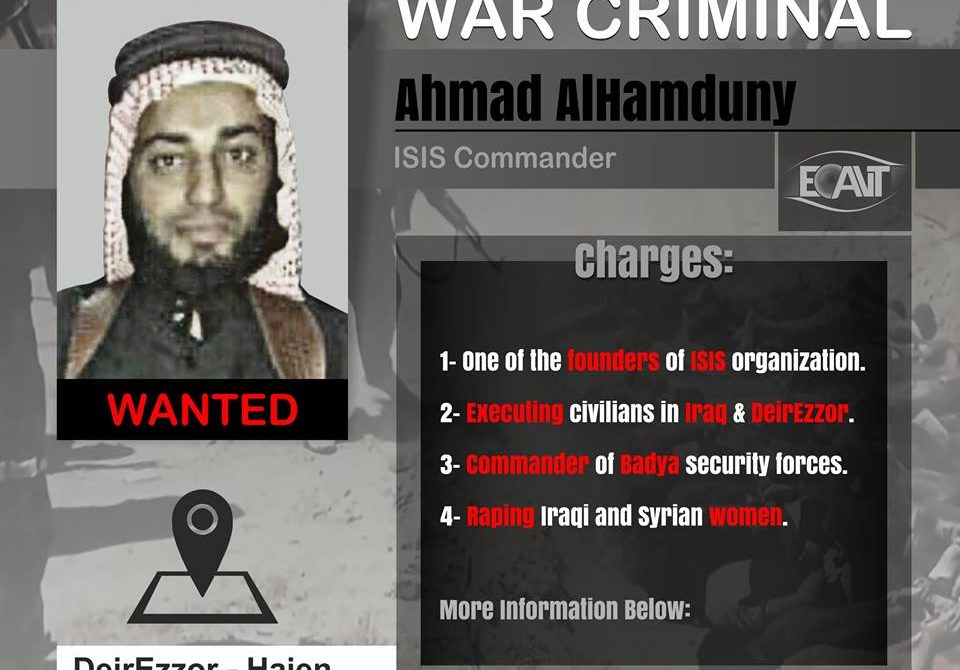 Name: Ahmed Hamdouni
Surname: Abu yaqeen al- Iraqi
Nationality: Iraqi from Mosul Age: 40 years
The clan: the clan of Tayyi al-Hamdouni
Profession: Leading ISIS and responsible for what is known as Badia security in Iraq and Syria
In the context of the policy of tracking and monitoring the movements of those involved in terrorism cases of the center of the Euphrates, for months has been able to collect information on the prominent leader of the ISIS terrorist organization and responsible for what is known as the security of Badia in the Iraqi AL-qaim and Deir Ezzor Syrian or the states of AL-khaer and Euphrates as called by the organization and confirms Al-Furat Center Ahmad al-Hamdouni is one of the most dangerous terrorists in Syria and Iraq, and we have been able to obtain his personal image with great difficulty
Al-Hamdouni was one of the prisoners in the famous Abu Ghraib prison, where he remained for two years. He was released by a decision from Iraqi Prime Minister Nouri al-Maliki. He contributed to the establishment of the ISIS organization. He entered prison by recruiting cells from inside the prison. He was traveling between Iraq and Syria where he killed his nephew, In the Iraqi police on charges of apostasy then settle in Syria specifically in the city of Albukmal and then to the city of Al-Asharaa
The al-Furat Center also documented the killing of two Yazidis, known as “the boys” by al-Hamdouni, where he had shot them near Deir Ezzor military airport because they refused to blow themselves up. He also killed a Yazidi woman whom the organization called the “AL-sabaia” But we were able to verify the incident through oral testimony and from a private source whose names we have take care for the safety of witnesses
Al-Hamdouni is also known for his black history in the city of Mosul. He is married to two Iraqi women and a Syrian woman from the Aleppo countryside where he married her against her will. Al-Hamdouni is now in a hajeen area in the eastern countryside of Deir Ezzor and we have almost certain information that he intends to escape to Iraq.
Euphrates Center Against Violence and Terrorism calls for prosecution of war criminals. The Center also maintains special documents and take care from mentioning witnesses for their own safety..